The first two months of 2022 have seen many volunteers heading to Ghana. Their time and efforts are making a major impact on the communities there.

With so much going on it's hard to know where to start, but we'll try to highlight some of the best stories and latest news from January and February 2022. 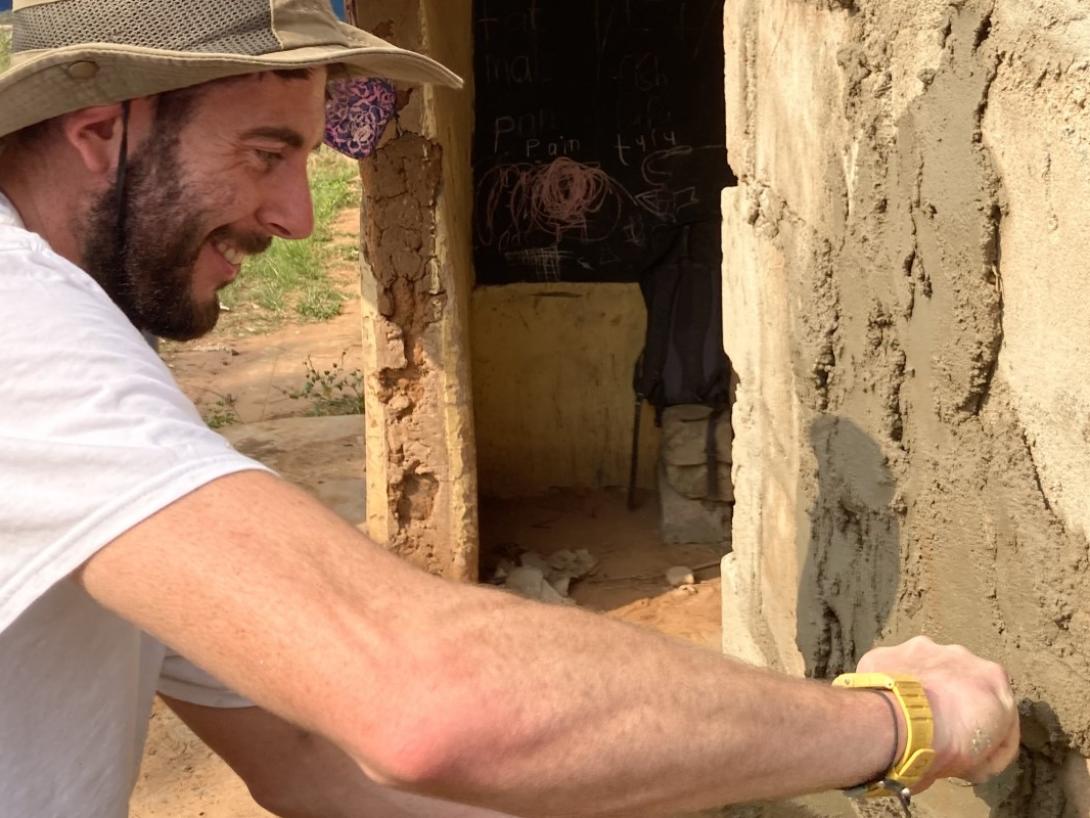 Building volunteers have been hard at work this year in Ghana.

Good education requires a safe, clean learning environment, so our Building Project in Ghana has been working daily on building a new classroom for a village school in the Akuapem Hills region in Ghana. Volunteer Joel's commitment to raising the structure has been integral to making it happen. He joined the project at the very start of 2022 and was very happy to have more pairs of helping hands joining him in February!

They've been plastering, brick laying, making cement and painting  walls. Their weeks of effort have paid off. Together they managed to complete the structure.

During their spare time, the volunteers have also been able to join Sports, Teaching and other community projects. Check out Joel's full account of volunteering on the Building Project.

Part of a community

Living and working for an extended time in one location really allows you to become part of a community. Teaching volunteer Jean has found this to be the case. She met one of her pupils while walking to school in February, and the parents recognised her. They see her often in the village, and trust her enough to walk their child to the school.

It's little moments like this that really emphasize the reputation our staff and volunteers have built over time. It shows the importance of interacting with local people and joining community events. Over time, trust and friendship is built.

Its important now, more than ever, to remember this global sense of community and friendship. Our teams are always striving to help build bridges across borders and cultures, and to connect people from around the world in efforts for good.

Experiences like this are not uncommon as travelling abroad gives you the opportunity to discover new cultures and traditions. Our destination staff are like family, and allow volunteers to fully immerse themselves within a community. They know everyone on the street and at the markets. You'll often get invited for meals at people's homes or to attend a wedding.

"I really loved staying with my host family. They tried to explain things to me and help me adjust to the new culture. I received an introduction to Ghana by my project coordinator Joseph. I can tell he loves what he does and loves teaching volunteers how to get around, what to see, and what they’ll be doing in their project" - Adin G, Teaching in Ghana.

Read All About It! 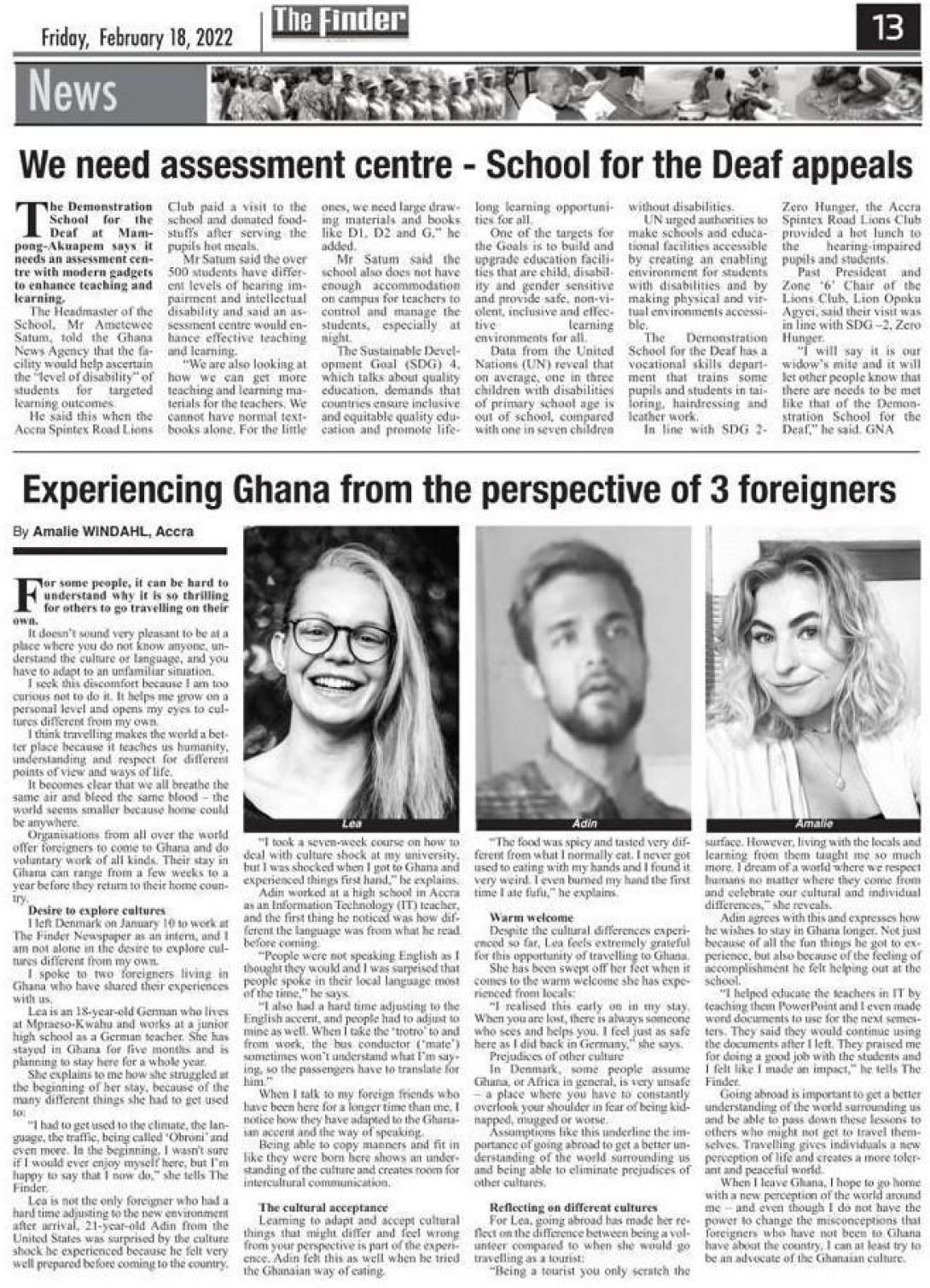 Amalie, a Danish Journalism volunteer, has published articles in The Finder newspaper and with their online publications.

She reported from the Danish embassy in Accra to cover a press briefing about the Ghanaian Minister of Communications and Digitalisation co-operating with the Ambassador of Denmark. Together they have pledged to expand freedom and human rights through technology. Her article explored issues of fake news and data harvesting through social media.

Amalie also wrote about the experience of foreigners in Ghana - including interviews with some of her fellow volunteers! They discussed many cultural differences and the challenges they faced to settle into life in Ghana. Lea, a fellow volunteer, reflected on the difference between being a volunteer compared to travelling as a tourist:

"Being a tourist you only scratch the surface. However, living with the locals and learning from them taught me so much more. I dream of a world where we respect human no matter where they come from and celebrate our cultural and individual differences."

Other stories have looked at the rights of children with special needs, the quality of teaching in schools, and reports into into different businesses and deals occurring in Ghana.

Check out our Journalism Project in Ghana if you'd like to follow in Amalie's footsteps and report on the latest news and stories.

Ghanaian food is not so common to find in Western countries. However there are a wide variety of exciting and new flavours to try.

Cuisine in Ghana typically includes cassava and plantain. There are lots of stews and soups with tomatoes, hot peppers, onions and other vegetables. A lot of dishes here end up looking rather orange or red in colour.

Volunteers have had many cooking classes in January and February. They've tried making all kinds of dishes. Check out the team chopping cassava for their meal in the video to the right. Its a nutty tasting root vegetable that can be used in many of the same ways as potato.

Popular dishes that volunteers have made recently include:

Red red - Black eyed peas, scotch bonnet peppers, tomatoes and onions are cooked in red palm oil. It is usually eaten with fried plantain, avocado or rice. With so many red ingredients, it's no surprise where it gets its name from!

Jollof rice - Another red looking dish. This West African rice dish is typically made with long-grain rice, tomatoes, onions, chicken (on the bone) and a whole range of spices. Scotch bonnet peppers pack in some spicy flavour, but the start of this dish is the tomato.

Fufu -  This dough-like food is made by pounding together boiled cassava or plantain using a wooden mortar and pestle. It is turned by hand and water is added gradually. It becomes soft and sticky. It is formed into rounded balls or slabs and served alongside soups and stews, where it can soak up the liquid. It is similar to 'ugali' which is found in East Africa, or 'pap' in South Africa.

"After a few weeks I acquired a moreish taste for the meals, such as 'red red' which was my personal favourite, and then of course after many failed attempts at making 'fufu' I eventually mastered the pounding method and served myself with the perfect dish which was very rewarding and delicious." - Joel B, Building Volunteer in Ghana 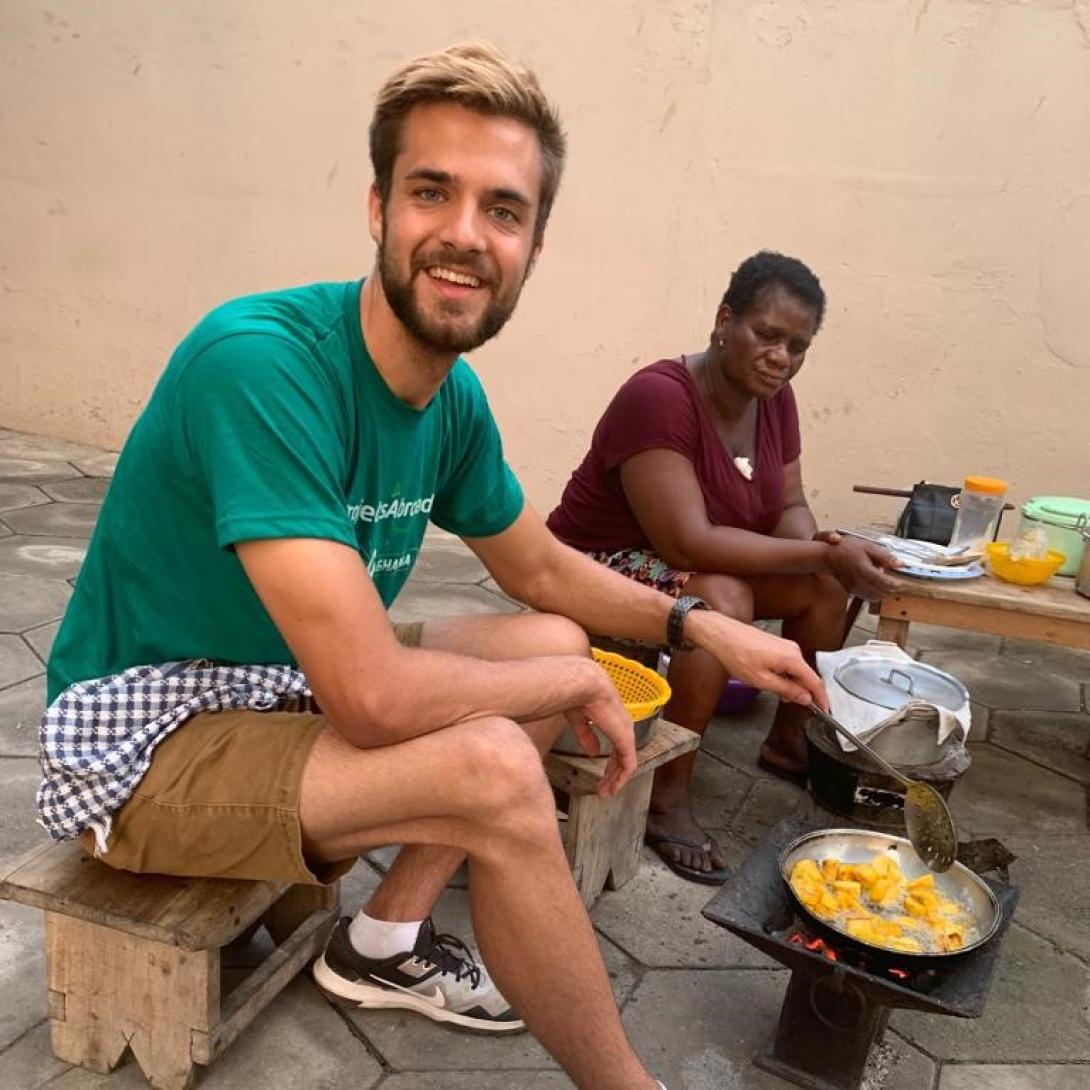 Adin learnt to cook local food during his spare time. 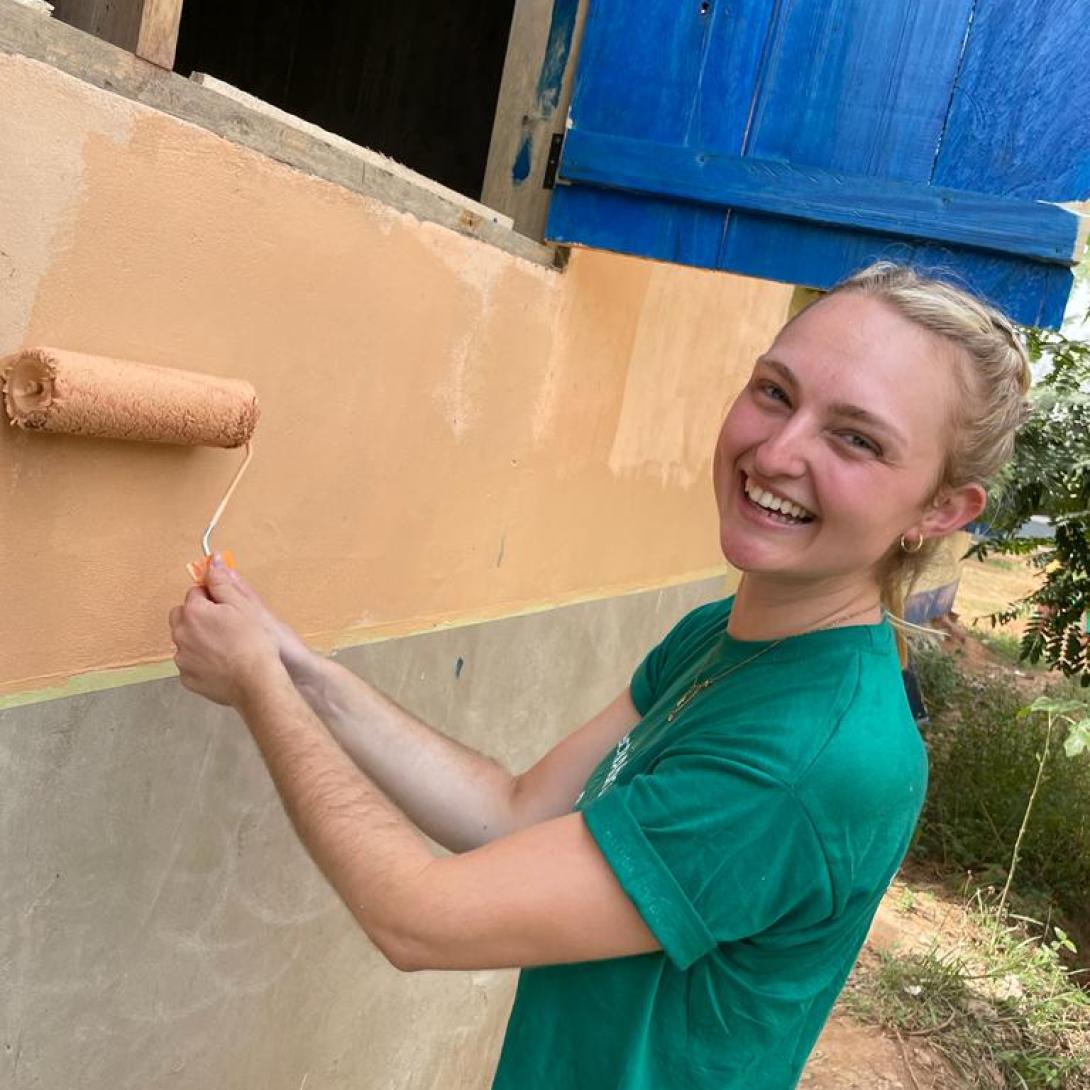 Adding the final touches to the new classroom. 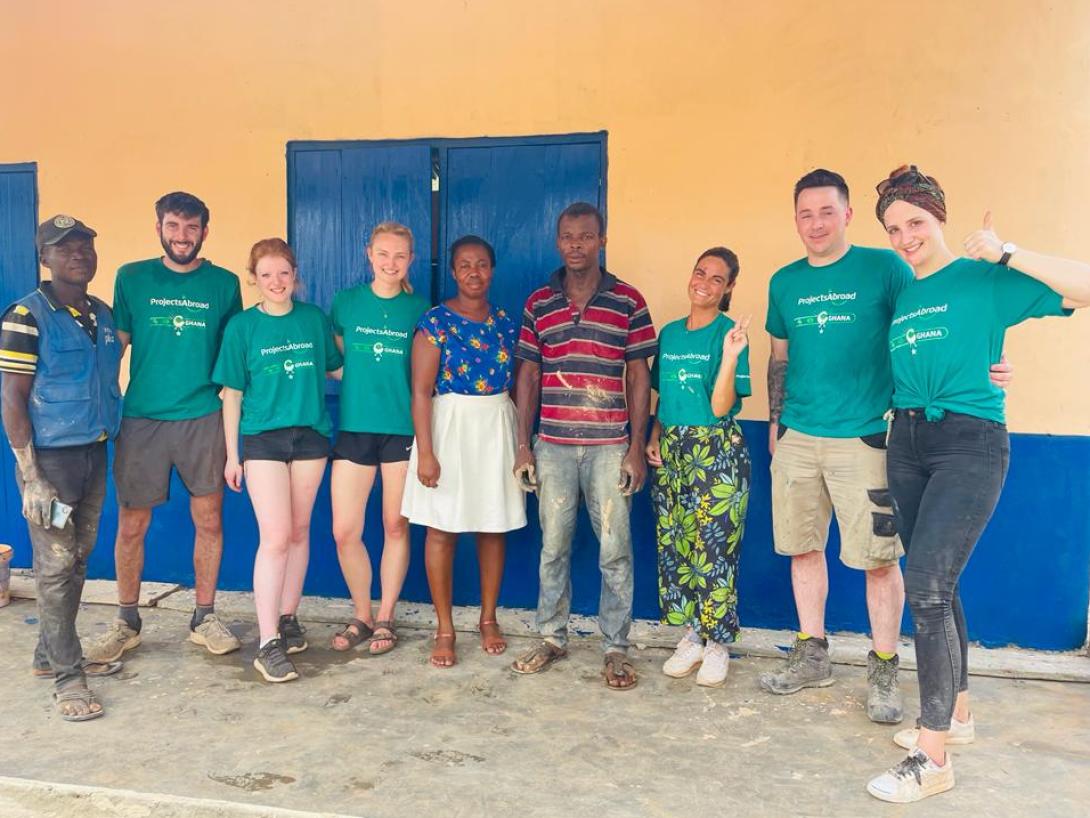 Volunteers celebrated building a new classroom in Akuapem Hills. Together they've made a safe space for learning. 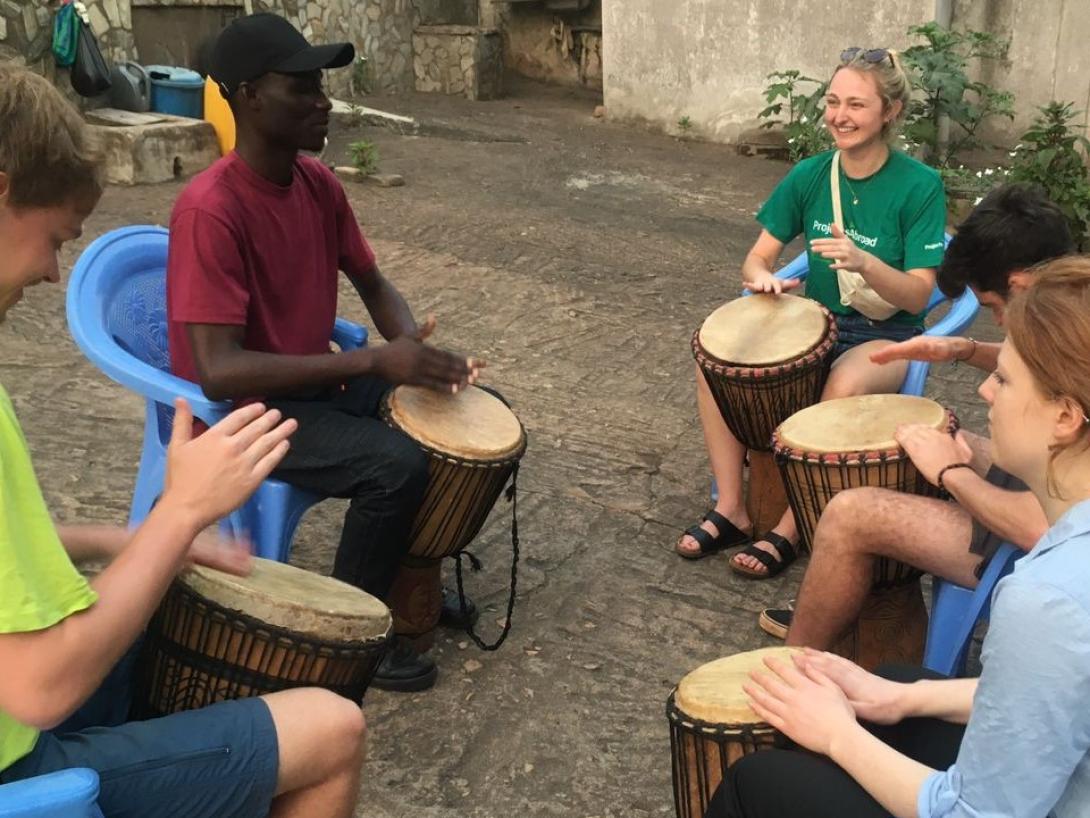 Volunteers made some noise! They learnt to play djembe, a traditional rope tuned, skin-covered drum. 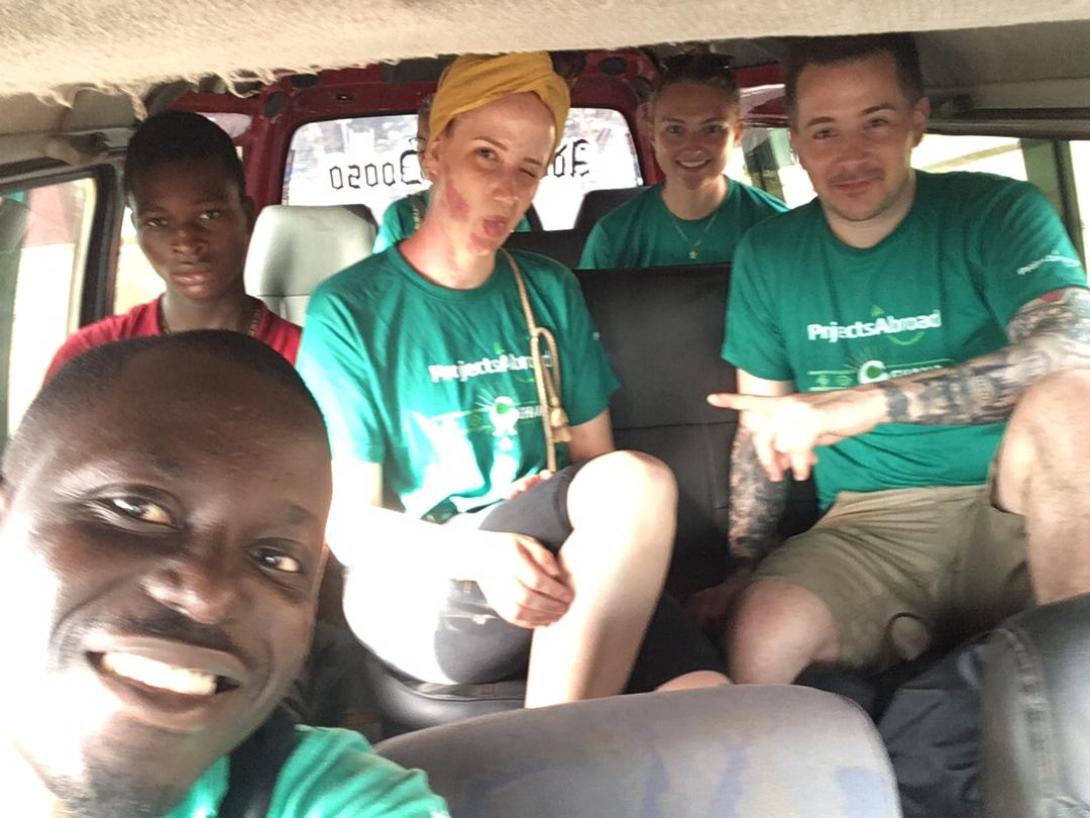 Part of the community. Volunteers use the local 'tro-tro' to travel around the area. 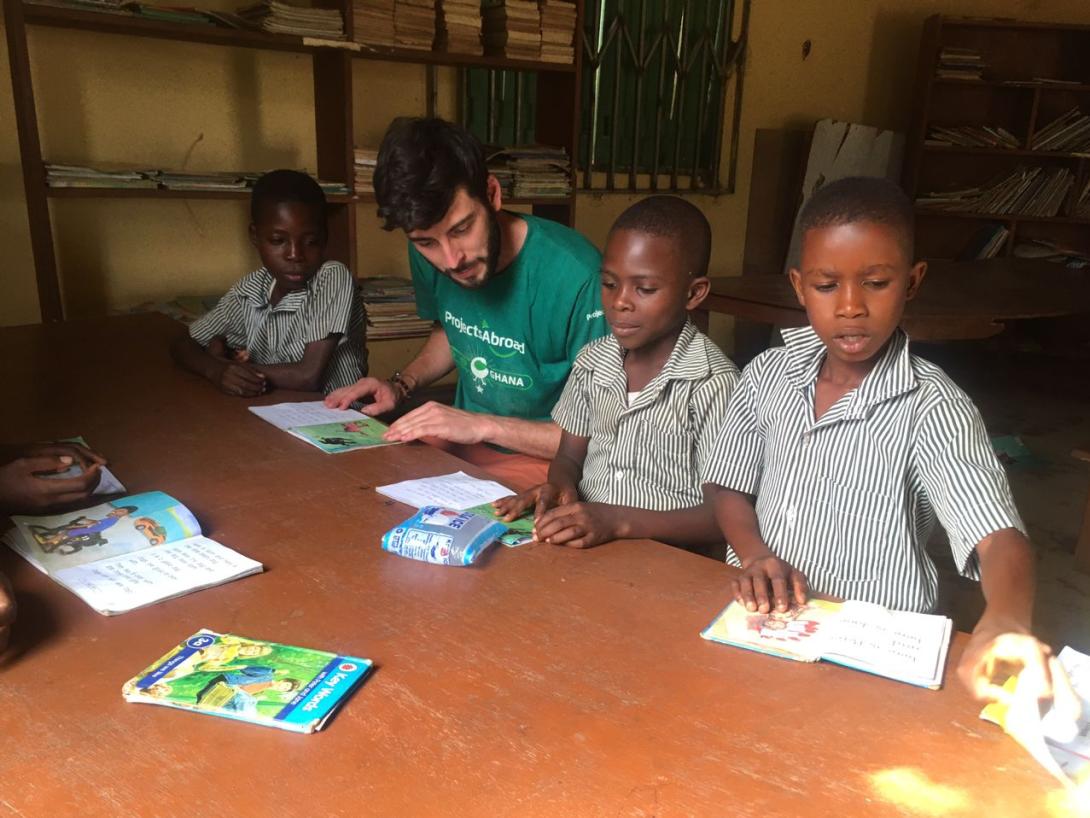 Joel taught English during his spare time. He made the most of every moment.

We're always grateful to receive stories and images from volunteers during their travels. It's wonderful to share memories and keep people informed about our project placements.

This helps to inform future volunteers about which location and project would suit them best. And it also ensures that previous volunteers can see the long term impact their work has made.

If you have volunteered with Projects Abroad and would like to share your story or images, contact us today at alumni@projects-abroad.org or add a review on Trustpilot, GoAbroad or GoOverseas.