New Programs & More : Get updated with the Latest News

Review: Sports Club in Peru by Craig B

This is my volunteering story of my time in Peru with Projects Abroad. I was doing a Sports placement in the Cusco area which I thought would help give me a head start at University since I am doing a sports coaching and development degree. Fortunately with Projects Abroad, they were so flexible with what dates I could leave and I knew everything about my placement before I even left. I was so excited I researched basically everything about the Sacred Valley that I could and kept getting more and more anxious to get on the plane and fly out to Peru.

I stayed in Calca which is just over an hour from the main town in the Sacred Valley of Cusco. I landed into Cusco Airport after a long day of flying and was quickly met by two of the Projects Abroad team who were to take me to my host family’s house in Calca. Unfortunately due to my great luck, there was a transport strike that day so we couldn’t actually drive anywhere and there was no alternative route to get to Calca so I stayed with some other volunteers Chloe and Aditiya in Cusco.

This was actually really helpful because they took me out in Cusco and they knew many more volunteers so instantly I knew I wouldn’t be alone. The scary part about this though is that Chloe was good mates with my cousin in Australia... small world isn’t it.

When I got to my host families house in Calca I was instantly shown around their wonderful and beautiful home that was surrounded by mountains and beautiful scenery. I was greeted by the whole of the Tamayo family and instantly knew they would treat me amazingly. We sat down for some morning coffee and just chatted for a couple hours but behind dictionaries as my Spanish to say the least is “no muy beuno”. I got really excited though when the father said to me in the best Scottish accent he could “I studied English for 6 months… 25 years ago” but that’s better than nothing I suppose.

After our little bit of banter they gave me a tour of the house and showed me my room and where everything is and then gave me a tour of the garden. As soon as I walked out I was jumped by 3 of the cutest dogs even, 2 cats and got the evil eyes from a couple turkeys and chickens looking for food. We went round the sheds which had a chicken coup, big stoves and then Paul’s room. I felt bad for Paul but not because his room was outside but because they had two bulls on the smallest chain I’ve ever seen right outside his window.

After the tours they took me around the town and I met more of their family and basically because I had a camera they would stop everywhere for a picture which I wasn’t expecting. Luckily for me it was the nicest weather but still quite cold as it was their winter in Peru at the time. They then took me to my work where I met two more volunteers and my boss Heime, who is most likely the nicest guy in the world. He stopped the practices of all the teams within the Apu Patisary of Calca and made them all come over and say hello to their newest coach.

Me and Alex the other volunteer who I worked with my whole time in Peru at the Calca team, were always in charge of the youngest team. It was scary how good they were at football for only 7-10 years old. The best part about the football coaching in Calca was Huerey the smallest child of them all who usually would get distracted by the smallest thing or would just lie down and make grass angels. His little antics usually made the day go by even faster. I also had a lot of free days to work when Apu Patisary wasn’t open, so I would work with Heime and go to Cusco to teach and also San Salvador (where luckily for me with my terrible Spanish, they only spoke the language of Quechua).

When I arrived some schools were closed due to swine flu, so I also did some community work with the other volunteers which was actually so much fun. Nothing better than waking up nice and early to go destroy some bathrooms with a huge sledgehammer to then rebuild one later on that day. Since Projects Abroad didn’t want to overwork us with hard manual labour for too long we usually would take some trips to places like the sulphur water pools which was awesome since I hadn’t had been able to have a warm shower since I had arrived. You also can’t go wrong with the Projects Abroad team organising salsa lessons. I am no dancer… but now I am the salsa king. Well okay I’m still not good but my intentions were good so everyone loved it.

There was lots of spare time on the weekend so to keep it simple I’m just going to name some highlights. Bungee jumping, paragliding, clubbing, white water rafting, waterfall jumps and loads more to be honest. Every night all the volunteers in Calca met at this one café and we would just play cards and have a drink.

This really made the trip seem way better as I made some really good friends and sometimes see some of them like Hannah when I was at the rugby last week. As well as the volunteers at the café we always had another guest of Shadow the big black dog. He was my favourite as when it was night time he would follow me into the town to go meet with the other volunteers and basically he would hang out with us to make sure I was safe on my journey.

Basically to summarise I am so thankful for everything Projects Abroad did from day one of my application to contacting me to make sure I arrived back in Scotland nice and safe. I would highly recommend Peru to anyone and if not Peru I would just recommend that they participate in the Projects Abroad volunteering schemes as they are no doubt the best! 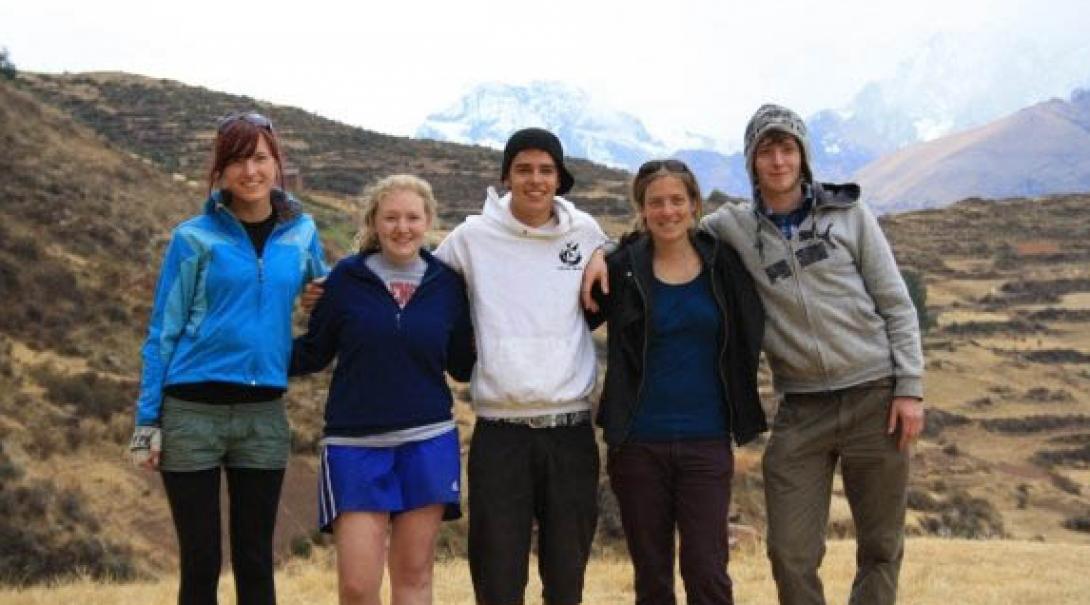