When I finished high school, I knew I wanted to do something out of the ordinary before going off to university. I wanted to live in another culture, meet new people and work with kids. After doing research, I chose Projects Abroad because of the opportunity to teach English in Romania.

I could not have gotten luckier with regards to the family I lived with for five months. They made me feel right at home from the first night I got there and treated me as if I were part of the family. The food I ate at their house was by far the best in Romania and I always knew I was in for a feast every day.

The city I lived in, Brasov, is surrounded by mountains and incredibly picturesque. It is a Saxon town with buildings that go back hundreds of years. There is a big Brasov sign on one of the mountains that you can visit and get one of the most amazing views of the city and everything beyond.

It was September when I arrived in Romania which was the start of the school year. I was teaching grades three through eight and playing sports with the kids as well. The first thing I noticed was the incredible English the older kids spoke. Every day I would go with the teacher to her class and help out with activities from learning numbers and letters with the third graders to helping the eighth graders read complex stories. After some time, the teacher would let me go and teach a class by myself if she had something else to do.

One of the best things about working with kids was that I could play football and handball with them a few times a week. It was so much fun to play football with fourth graders who wear Manchester United and FC Brasov football shirts. They are ultra-competitive and will do anything to win.

Another great thing about being at a school was going on the fieldtrips. During my second week I went on a fieldtrip to the cities of Sigishoura, Sibiu, and Alba Julia. It was beautiful and warm and I got to see a lot of Romania that I wouldn’t have seen otherwise. The day was long (fifteen hours), but I got to know many of the kids better as well. By the end of my time in Romania, I had become good friends with the kids and we’d sometimes go get pizza after school.

On the weekends all the volunteers would go out to bars and clubs and occasionally take day trips to other cities. When it started to snow, we went skiing and ice skating as well as having massive snowball fights all the way down the massive Republicii street. For Friday nights we would often go to Deane’s Irish Pub where his big band would play. One time, a few of us sung with the band.

Saturday night was usually clubbing night with the often visited and entertaining Tequila Bowling to the more expensive but incredible Kasho club, which we were told Madonna had even visited. And after clubbing, five-in-the-morning McDonald’s never tasted so good.

My whole experience of teaching English and being with other volunteers from all over the world was the most fun and rewarding time of my life. I learned far more in my five months in Romania than I will ever learn in university. Toward the end of my time I was a little bit sad that I was leaving. Daniela, my teaching supervisor and great friend, told me something that I will always remember, “Don’t be sad it’s over, just be glad it happened.” And I am really glad that it did. 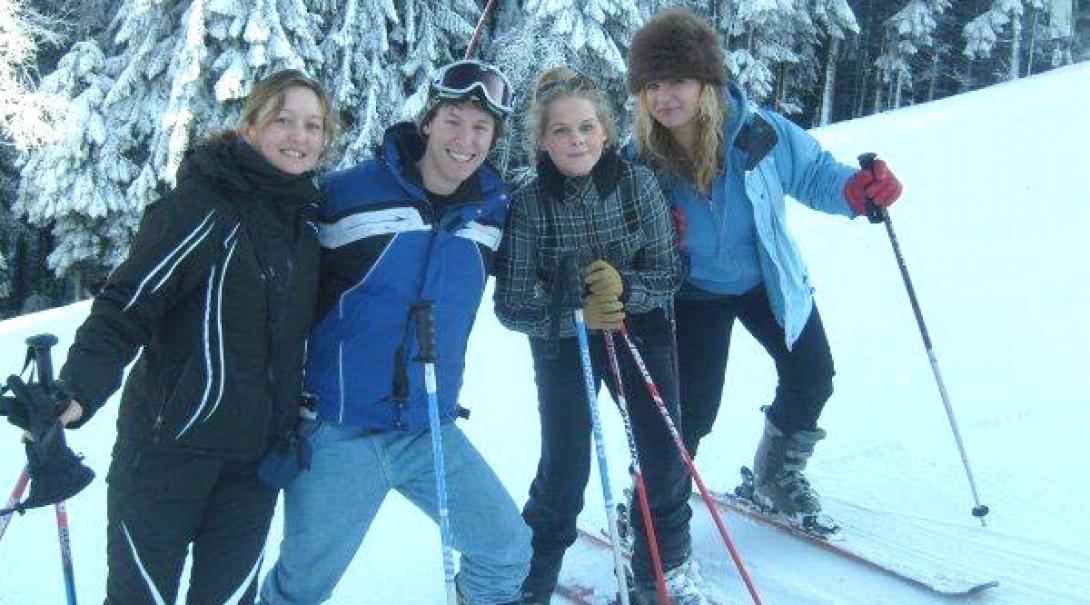