When I left for Mongolia in summer 2011, it was not my first experience with Projects Abroad. Indeed, I had already had the opportunity to go to Costa Rica in 2009 for a Conservation & Environment project in a national park, and a teaching project in a day centre for poor children. Therefore, though I had already travelled many times, including outside Projects Abroad’s frame, my trip to Mongolia was the most surprising I have ever done.

It is a land of contrasts. On the one hand, vast, virgin, wide plains, which I visited during the weekend excursions, and through which I went in the Trans-Siberian Railway on my way back home; countryside where a few people are still leading a nomadic life. On the other hand, Ulaanbaatar, a dusty, dirty and congested city where you cannot spend a single day without risking your life crossing the street; a city around which nomads flock to settle and to find work, often unsuccessfully in spite of the town’s rapid growth, a fact which brings idleness, alcohol problems and obesity.

Hence, Ulaanbaatar is also a city full of contrasts, between some incredibly poor areas and some scandalously luxurious ones, mainly made up of hotels and of brand stores built by foreign investors. There are contrasts down the streets as well, between traders and children begging for money; these result from the rather recent arrival of a mishandled capitalism, nevertheless welcomed by people who have lived under a communist economy for a long time. The contrast is finally architectural as well: one may see those new buildings, the older communist blocks (I was hosted in one of them), as well as, at a street corner or hidden behind a tower, some magnificent Buddhist temples which have retained all their secrets.

If Mongolia was different from what I had imagined it would be before going there, I was myself really different from what the woman who hosted me had expected of a European young woman, which caused a lot of comical situations. In general, Mongolian people have an equanimous temperament, they rarely show their emotions, but it does not make them any less hospitable and we shared a lot in spite of the language barrier.

The best part of my stay was definitely my teaching project. I was placed at the Humanities University and my mission was to teach French during the summer courses. The planning of the project had been a real challenge. Because the University did not own a computer or a printer, I had to spend three weeks preparing my lessons before leaving Switzerland and thus had to take approximately four kilos of copies with me.

Once I got there, I had to adapt to an education system which is very different of ours. Firstly, all the levels and ages (from 17 to 45) were mixed, so that the beginners and advanced students were all in the same group. Secondly, I was very busy because I usually had to teach from 10am. to 1pm. without any break, and the same from 4pm. to 8pm; during this time, the students could come and leave whenever they wanted. Moreover, according to the University’s rules, the students had the right to use their cell phones during the classes, so the first thing I had to do was ask them to go outside the classroom when making calls.

In spite of those few difficulties, I had the luck to teach to extremely motivated people. I seldom had to make any discipline, and the students showed an enthusiasm and a desire to learn that I have never met in any Swiss student. They were completely aware of the importance of knowing other languages in a country where tourism is a major opening, and they all wanted to go abroad to improve their level. They worked a lot, and they always learnt the vocabulary of the previous lessons without my telling them to do it.

Almost all of them were learning at least two foreign languages, so it was sometimes possible to explain difficult French expressions by the mean of those other languages. Regarding the Projects Abroad’s team, I really appreciated the freedom that was given to me and the fact that they trusted me from the beginning; I could teach alone from the first lesson on, and I have benefited a lot from this independence regarding the improvement of my professional skills.

Getting to know the students

Even if the students were at first shy, the atmosphere quickly became friendly, and I took a great pleasure visiting temples and museums with them, in order to give them an opportunity to show me their culture and religions (mainly Buddhism, but shamanism too) and to talk about their country in French, as if they were my guides. Sometimes, it was even an opportunity for the students themselves to learn about their own culture, because most of them never had the chance to visit the museums we went to, perhaps for financial reasons.

During my stay, I have been impressed by the ability of Mongolian people to put ancient ethnical traditions and recent evolutions of all kind together. In the West, we often tend to contrast tradition and progress, considering these notions as irreconcilable. In Mongolia, it seemed to me that such a rift does not exist, and that people will not try and choose between one and the other, because they want both.

Even if I stayed only one month, it was really difficult for me to leave such friendly and warm-hearted people, and the farewells were very moving. Although I came back home by train, from Ulaanbaatar to Basel, which was an incredible seven-day adventure, I had a big cultural shock when I arrived in Switzerland, a shock which I took a few weeks to overcome. Now, I have kept in touch with many students and we regularly write to each other.

When they asked me before I left if I would ever come back, I did not promise them anything, but I truly hope that I will have the opportunity to see them again one day. Meanwhile, I encourage each person who wishes to have a rewarding experience to make this kind of project, especially in teaching, because it allows you to meet the locals and to discover the culture genuinely, without any dubious intermediary.

I have lived an experience which has transformed me and made me evolve. The smile and the serenity of the Mongolians whom I had the luck to meet will stay with me forever. Regarding knowledge and human relationships, I came back home with the feeling that I have received as much as I have given; I cannot find the words to express my gratitude. 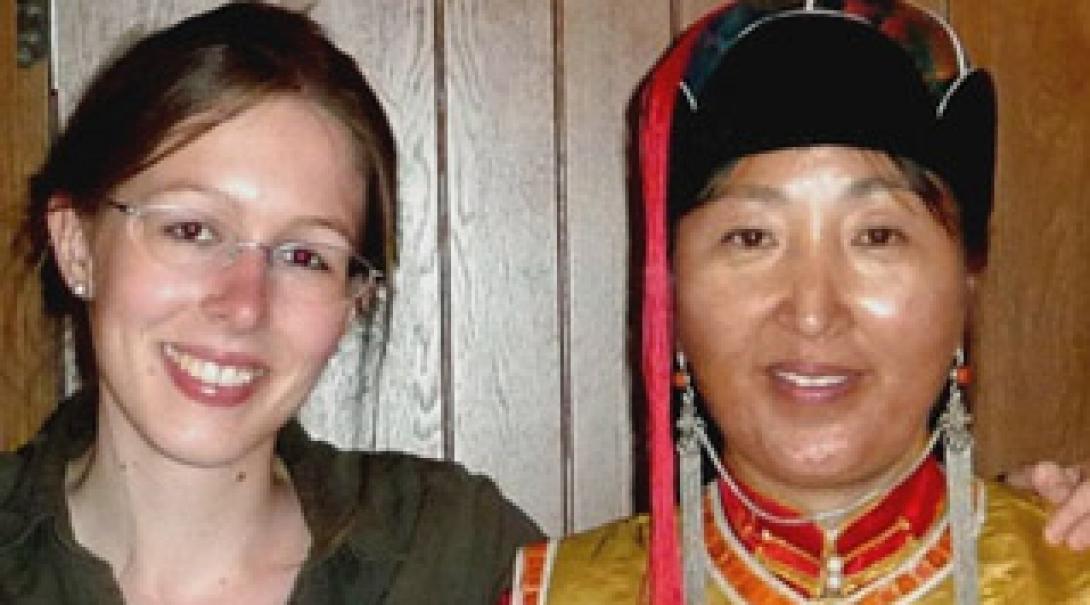